With production of the iconic off-road utility vehicle coming to an end, we take a look back at the origins of the Land Rover Defender, marking an exciting new era in the vehicle's history. Conceived from the original Land Rover series in 1947, the Defender (initially simply titled 'Land Rover') went on to break the mold as the go-anywhere, multi-purpose vehicle 'for the farmer, the countryman and general industrial use'. With three Limited Edition models available, in anticipation of the new range, we journey back to where it all began...

Re-branded in 1983 as the "Land Rover Ninety" and the "Land Rover One Ten" (with the numbers representing the wheelbase in inches), these new models replaced the original Land Rover series and at the time of launch, joined the Range Rover as the only two vehicles Land Rover currently had in production. Distinguishable by the full length bonnet, revised grille and the fitting of wheel arch extensions to cover wider-track axles, the '90' and '110' models were modernised with a permanent four-wheel drive system derived from the Range Rover and a new series of progressively more powerful engines.

This change was reflected in Land Rover, who went on to make improvements to the County model year-on-year to attract both new buyers and to encourage existing owners to trade in for a new vehicle. Numerous Defender enthusiasts have commented over the years that a key element of the model's success was the switch from the leaf spring to the coil-spring, improving off-road ability, load capacity and handling - three elements that the Defender is renowned for to this day. But this was just the beginning for the Defender.

With Land Rover seeing out the remainder of the 1980s with the introduction of the Land Rover 127 featuring a larger wheelbase and major improvements to the engine range in order to match the more advanced offerings available from Japanese competitiors, most notably the 'Diesel Turbo Engine' with a modified crankshaft designed to cope with higher internal temperatures. Land Rover adopted more modern practices, using marketing campaigns to target consumers who would not previously have been expected to buy a Land Rover. Operation was streamlined with most production being brought into the Solihull Factory which was expanded to cope with demand.

The biggest change came to the Land Rover in late 1990 when it was officially christened 'The Defender. The company had just introduced the Discovery model requiring the original Land Rover to acquire a new name. The XS station wagon was introduced in 2002 as a top-specification level, offering features such as heated windscreen and seats, air conditioning and traction control. Spring 2007 saw the introduction of the Puma Engine (adapted from Ford's DuraTorq line). The engine's lubrication and sealing system was adapted for use in wet and dusty conditions and to maintain lubrication in extreme angles in off-road use. Several noticeable exterior changes were made with the bonnet being reshaped with a bulge to allow the new engine to fit comfortably. The new dashboard and ventilation system necessitated the removal of distinctive air vent flaps underneath the windscreen, which had been a key feature of previous Land Rover utility models. These modifications along with interior changes to the seating and dashboard layout molded the image of the Defender we know and love today.

WHATS NEXT FOR THE DEFENDER?

In 2012, Land Rover announced an update of the Defender, involving the installation of the ZSD-422 engine, capable of meeting increasingly demanding Euro V emissions standards. Although smaller than the previous unit, the power and torque outputs remained unchanged and the same six-speed gearbox was used. The introduction of a soft top body style to the general market proved a popular choice.

In October 2013, Land Rover announced that production of the current Defender would end in December 2015, to be replaced by a brand new Defender range. Three exclusive limited edition vehicles will launch this year, before the introduction of the new Defender family in 2016. The 'Heritage', 'Adventure' and 'Autobiography' will offer Land Rover enthusiasts an opportunity to take home a slice of Defender history. The 'Heritage' will be available in 'Grasmere Green' with aluminium interior features while the 'Adventure' will sport a more rugged appearance, aimed at buyers who crave true 'go-anywhere' ability. All Adventure models will also sport seven inch LED projector headlamps, a special roof-rack and a snorkel and rear access ladder and pricing will begin at £43,495.

Completing the range is the flagship 'Autobiography' coming with a 28bhp power boost, standard 16 inch alloy wheels, privacy glass and an interior of Land Rover's full Windsor leather. Production of this model will be limited to only 80 UK cars, making this a much sought after Defender collectable. Prices for this model will begin at £61,845.

AN ICONIC 1KM SILHOUETTE ON THE SANDS OF RED WHARF BAY, UK

In honour of marking the beginning of a new chapter in the Defender story, a huge, temporary work of art was created at Red Wharf Bay on the island of Anglesey, UK, involving six Defender models each from different eras of the model's reign. The six Defenders, towing chain harrows, took three hours to create the iconic 1km image in honour of our favourite off-road vehicle. Watch the video of this fabulous creation and see Nick and Stephem Wilks, Nephew and Son of Maurice Wilks, discuss the conception of Land Rover at the very same bay in Anglesey in 1947.

'My Father Maurice met his brother on a beach' reports Stephen Wilks. 'He was explaining the concept for a new idea for a go-anywhere, do-anything vehicle. He made a drawing in the sand of an outline of how he thought the Land Rover could be made.' 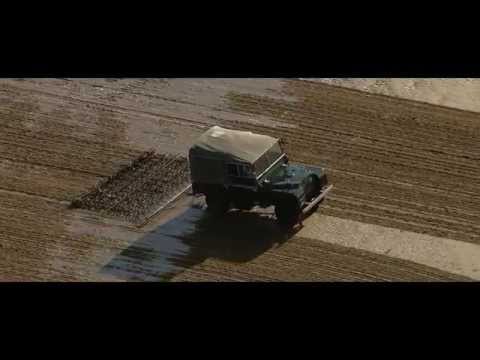 For more information on the new Land Rover Defender, select the Make an Enquiry tab or contact your nearest Pentland Land Rover dealer on the numbers below: