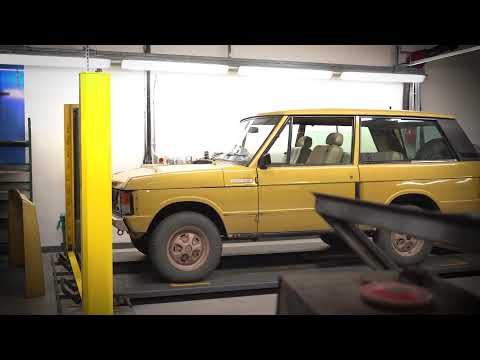 In 1970, a Global Icon and motoring phenomenon was born. The Range Rover changed everything a luxury executive saloon and an off-road AWD stood for and launched the SUV sector that we know and love today.

The Range Rover, without any doubt defined the luxury 4x4 vehicle and over the years has continued to be the vehicle of choice for the Royal Household, politicians, singers, actors and superstars across the world.

Nearly fifty years on, the Range Rover has maintained its most credible position as the ‘ultimate SUV’ to this day. Ever since it became the first vehicle to be exhibited at the Louvre in Paris as an ‘exemplary work of industrial design’ the Range Rover has gone on to smash records with a number of world firsts in its long and distinguished heritage.

Originally launched as a two-door configuration, the four-door wasn’t launched until 1981. The incredibly popular design remined in production up until 1996. The demand was so high, it actually remained in production alongside the MK2 model for two years, and the name Range Rover Classic was introduced to distinguish the model from its more modern sibling.

Range Rover Reborn is a new programme from Land Rover classic, providing the unique opportunity to purchase an original and highly collectible vintage Range Rover direct from the original manufacturer.

“Range Rover Reborn underscores our commitment to nurturing the rich heritage of Land Rover, and is a rare op-opportunity for customers to own a valuable and genuinely collectible automotive icon. It is a wonderful way to preserve the much sought after three-door original Range Rover from the 1970s, from period-correct colour ways to interior trim and accessories”

The craftsmen and have drawn on decades of engineering and design expertise to ensure knowledge, love and passion are built into every Range Rover Reborn - ultimately, ensuring the finished vehicle is as authentic as possible.

The First Range Rover ‘Reborn’, was a carefully selected 1978 Classic Range Rover. The Specification is as follows:

The experienced craftsmen will work closely with their customers and advise of the best possible base vehicles for the restoration process – in terms of collectability, preferred chassis numbers and unique characteristics.

The complete restoration is undertaken to the original 1970s factory specification, in which the Range Rover first left Land Rover. However, as the final spec is at the owners’ discretion, the starting price for the ‘Reborn’ Range Rovers begins at £135,000.