The history of Audi motor group

The founding of Audi dates back to 1899. In Cologne, Germany, August Horch founded his first automobile company: August Horch & Cie. Shortly after in 1909 August set up another automotive company, this time in Zwickau, East Germany. He named this company Audi Automobilwerke GmbH, Zwickau, which has been trading under this name since 1910. The name came from Horch, which means 'listen' in German which translated into Latin is 'Audi'.

In June of 1932 the State Bank of Saxony issued an initiative for Audiwerke, Horchwerke and Zschopauer Motorenwerke J. S. Rasmussen AG (DKW) to merge and create one automotive company, along with Wanderer's motor vehicle division. The merging of these 4 companies became: Auto Union AG, making Auto Union AG the second-largest motor vehicle manufacturer in Germany.

To promote unity the 4-rings logo was designed. These interlocking rings intended to symbolise the inseparable unity of the four founding companies. During the merger the four original brand names were retained with each brand being assigned a specific market segment within the Auto Union AG: DKW - Motorcycles and small cars; Wanderer - midsize cars; Audi - cars in the deluxe midsize segment; and Horch - luxury cars at the top end of the market.

Audi was an instant success - one of the keys to this success was the Audi 'Front' Type UW - the principal feature of the new Audi was its front-wheel drive. The first examples of Audi's new car left the production line at Auto Union's Horch factory in December 1938. The Audi 920 rapidly became a market success and a hit with customers!

Unfortunately this success was brought to an abrupt halt by the outbreak of the Second World War. The last Audi of this era was built in April 1940 and there would not be another Audi passenger car for a quarter of a century.

After the war had ended in 1945 the Soviet forces had occupied the zone where Auto Union AG's premises were and they dismantled the plant and had the company removed from the Commercial register. In 1949 a new company called Auto Union GmbH was established in Ingolstadt. Later in 1949 Auto Union GmbH started manufacturing delivery vans and motorcycles.

In their early years Auto Union GmbH built the tried-and-tested DWK products with their two-stroke engines, being built once again under the four-rings brand. In the years following the war there was a demand for robust and reliable vehicles. In the early 60s due to multiple factors sales of DKW vehicles were on a decline. To counteract this, engineer Ludwig Kraus was commissioned to adapt a four-cylinder, four-stroke engine for Auto Union. The car was finally launched in 1965 and was the company's first post-war design with a 4-strok engine. It heralded the start of a new era, which in turn called for a new product designation: this was the rebirth of Audi, a name rich in tradition.

The Auto Union "Audi" became a resounding success. This model line remained in production until 1972, undergoing a few technical and visual modifications along the way. During this time a new generation had began - with Auto Union becoming a subsidiary of Volkswagenwerk AG in 1965. At this time the bosses at Volkswagenwerk blocked Ingolstadt's engineers from developing models of their own. Their plan was to use Ingolstadt's production capacity to help build the Volkswagen Beetle.

However, Ludwig Kraus had a different idea. At the time Ludwig was Head of Development and a member of the board of Management - he started to develop a new Audi model in secret. The subsequent vehicle, which the management team in Wolfsburg eventually sanctioned, was first presented to the press in Ingolstadt in November 1968, it's name: Audi 100. The huge success of the Audi 100 helped Auto Union to safeguard its separate identity.

In 1971 the company introduced a new advertising slogan "Vorsprung durch Technik". In the spirit of these new guiding principles, the first generation Audi 80 was launched in 1972. Of this first generation Audi 80 over 1 million cars had been produced. There was swift advancements made with the five-cylinder engine being introduced in 1976, turbocharging in 1979 and quattro four-wheel-drive in 1980.

The Audi quattro model made its debut in March 1980 at the Geneva Motor Show. With the "Vorsprung durch Technik" moto shining through - outstanding traction through a permanent four-wheel drive and two manually lockable differentials made the Audi qauttro perfect for use on smooth or icy surfaces. 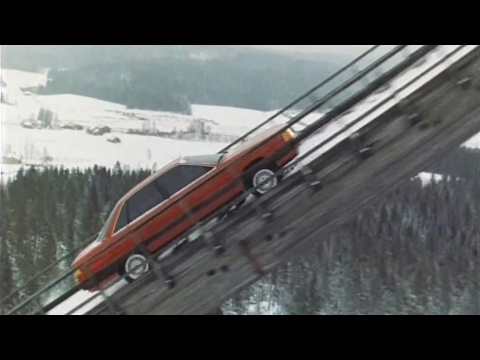