If you drive an Audi to work every day, you might be surprised to discover what your car is capable of when it's let off the leash. Here we do just that, by driving a standard Audi A7 Sportback quattro over dunes, deep into the Arabian Desert.

The Audi A7 Sportback cuts a fine figure gliding through downtown Dubai, its sleek lines reflecting the city's modern, glass-fronted buildings. But it's not the A7's sophisticated design, nor its luxurious interior, that's brought us to the Middle East. We're here to put the A7's quattro system to the test by driving it up a sand dune.

'You want to do what?' gasps our guide, Ara Sahakian, a sand-driving expert and owner of expedition company Offroad Zone Dubai. As we repeat our mission, his dark eyes widen in disbelief. 'You must be mad', he says. 'It's hard enough navigating the sand in a specifically modified SUV, let alone at the wheel of something you normally drive to a company board meeting'.

While this may be true, the Audi A7 Sportback quattro actually boasts a number of features many urban SUVs don't offer, not least permanent all-wheel drive. The system is complex and sophisticated, and in normal driving conditions it barely gets a work-out. We want to see what a standard quattro road car is really capable of.

Despite his reservations, we meet Ara early the next day and drive him out of the city. Skyscrapers are quickly replaced by golden sand. At dawn, we turn off the road, and our guide tells us to let down the tyres. We don't think much can come out of the low-profile rubber on our car, but Ara insists we need to drop the pressure. 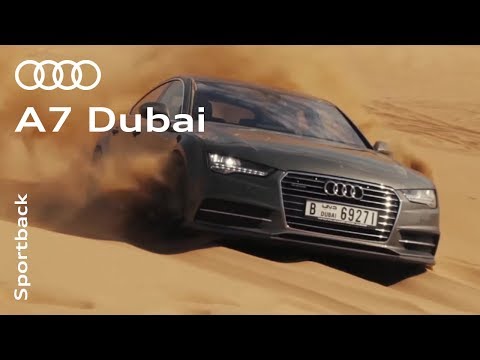 WHY QUATTRO IS ON YOUR SIDE, ALL DAY, EVERY DAY

Once a two-wheel-drive car begins to spin its wheels no amount of power can help. Audi's quattro technology spreads driving force sensitively between all four wheels to keep you moving.

Even on dry roads quattro offers a big safety advantage. Sharing the job of delivering power to the road between all four wheels as opposed to just two enables all four tyres to grip better.

from 3 to 0.8 bars: 'Using inflated tyres on sand is like walking on snow in stiletto heels', he says. 'Deflating the tyres increases your footprint, mimicking the softness of a camel's hoof- although if you let too much out, you risk ripping the tyre from the wheel.'

Then we switch off traction control, select the comfort setting on the adaptive air suspension, and venture across the sand. The car is still very low, especially at the front, but Ara says if we choose our route carefully, all will be fine. 'Avoid sharp entry/exit angles', he warns. 'Otherwise we'll rip off the bumper.'

From the start, the A7 Sportback grips well, despite the liquid like surface it's running on, and the quattro technology works its magic. In normal driving situations, 60 per cent of the engine torque goes to the rear wheels and 40 per cent to the front, but whenever an axle begins to lose grip, the majority of energy is diverted to the wheels achieving better traction: up to 85 per cent can flow to the rear and up to 70 per cent to the front.

We easily clear the first small dunes, but Ara stops us from celebrating too early as he points out our destination ahead: a high peak called Pink Rock that looms above the wide plan, dominating the horizon.

To clear larger ridges, the A7 uses its powerful 3.0 TFSI petrol engine to full effect, sending plumes of golden

powder flying behind us. Ara barks a list of orders: 'Don't stop on the flat. Use the slope to gain motion. If you can't get over a dune, always reverse. Never try a U-turn!' Using the car's responsive steering to climb in wide swerves, we reach our destination. 'I can't believe it' gasps Ara, as this standard road car rests in this stunning landscape. The sun has reached its zenith and the heat outside is unbearable. Inside the cabin the four-zone deluxe air conditioning, which comes as standard on all models, is running well- we haven't even broken a sweat!

HOW QUATTRO HAS HELPED AUDI RULE THE WORLD

Audi debuted its all-wheel-drive technology on the 1981 Monte Carlo Rally. On the snowy mountain passes the quattro left the opposition reeling and went on to win four world rally titles.

With 118 major race wins and 13 championships, Audi's quattro technology proved so devastatingly effective on the race track that the authorities banned it from touring car racing in 1998.

Straight out-of-the-box victories are exceedingly rare in the world's greatest endurance race. Audi's quattro technology proved the exception, winning Le Mans on its 2012 debut and every year since.

With 42 businesses, representing 14 leading brands across Scotland, our experienced sales and service teams are waiting to hear from you!